This thread is meant to list, describe and discuss current external sources that are picked up by the MEG. Ideally, these can later be identified and removed or mitigated, but in the meantime, they may be recognized, noted and possibly cleaned by SSP from noise recordings.

At this time, there are 3 distinct artefacts seen in the MEG that have not been identified:

Each artefact is described in more detail in separate posts below.

Seems to happen around noon to 2 pm. Slowly increasing frequency could indicate an accelerating spinning device… I’ve already asked around (neighbors on floors above and below) about this, when it occurs, and haven’t found any suspects.

This is a weak signal, barely visible during noise collections, so not much of a concern. It looks like an initial spike followed by about 1 second of 12 Hz oscillations and another second of 6 Hz oscillations. 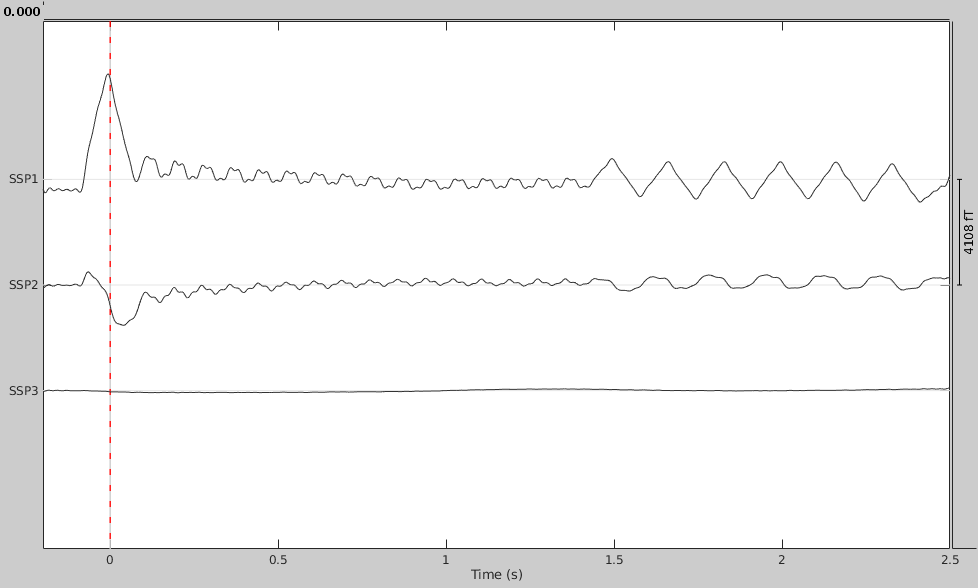 It occurs not quite regularly, but approximately every minute. It is not always present: it seems to follow a variable schedule, mostly on during the day and off at night, though sometimes on around midnight. So it could be a device that automatically switches on based on occupancy sensors (hallway lights? possibly turning on for example when security does rounds at night).

Here is the raw (no CTF noise reduction from reference channels) frequency spectrum showing peaks at 6 Hz and harmonics (12, 18 and 23.3 Hz?), among others. The side lobes around 6 Hz can be explained as due to the rectangular window that multiplies the signal (the oscillations only last a short time), and the harmonics since the signal looks more like a triangular than sine wave. 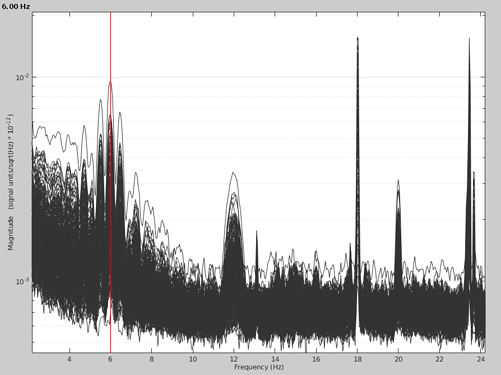 Here are the topographies of these 4 peaks from 2 different recordings on different days, obtained by fitting a single sinusoid (in phase) across channels. 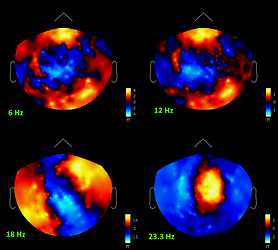 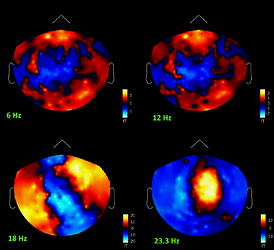 If we do an SSP analysis, we can get two components that capture the whole of the artefact. The first component resembles the 6 and 12 Hz spatial patterns, while the second component resembles more the 23.3 Hz pattern and also seems 90 degrees out of phase with the first. 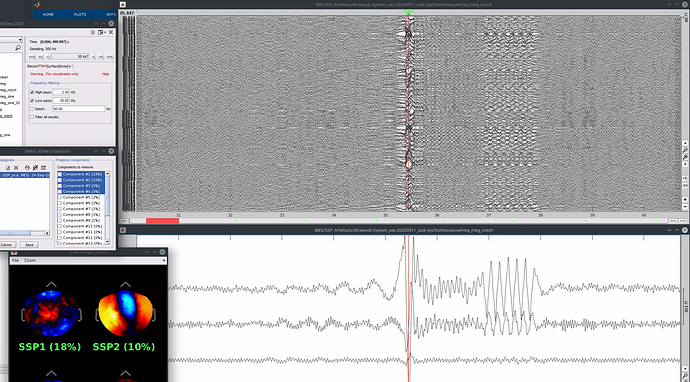 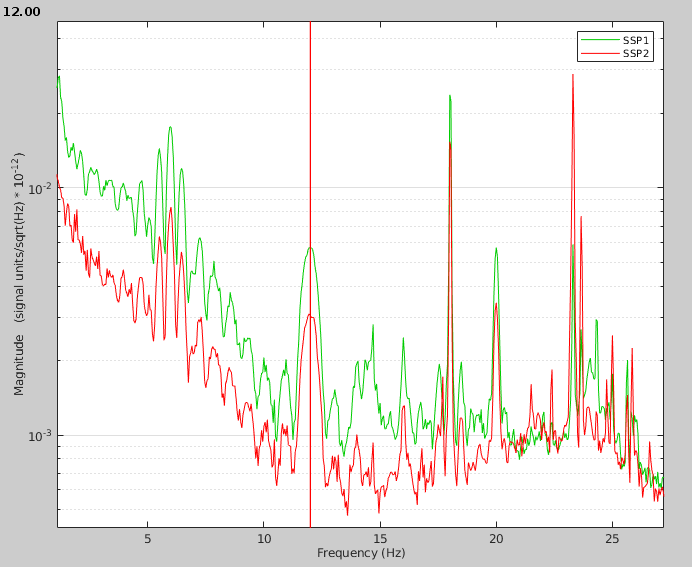 This artefact is confirmed to be coming from outside the shielded room and is not caused by something in the MEG lab that can be turned off during acquisition (computers and most other devices).

New discovery, so far always present since the MEG is back in operation, even during a 24-hour sampling recording from Fri pm to Sat pm. The frequency is not always the same but is a sharp peak, so far observed at 0.7, 0.8 or 0.9 Hz. A similar peak was observed in some older noise recordings (before the system shutdown Mar to Aug 2020), but not the majority. The peak frequency and amplitude does not vary with the recording sampling rate (not aliased).

It’s confirmed to be coming from outside the shielded room (larger with door open) and is not due to anything that can be turned off while collecting (most devices and computers in the lab). 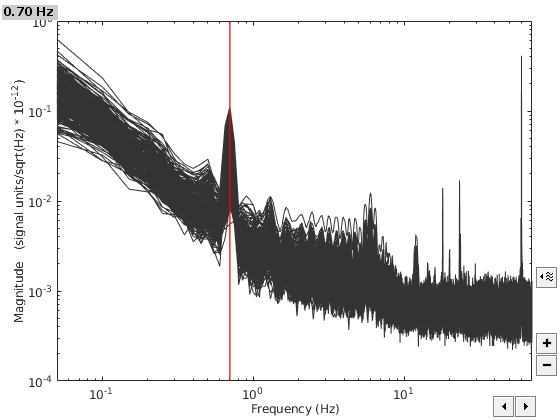 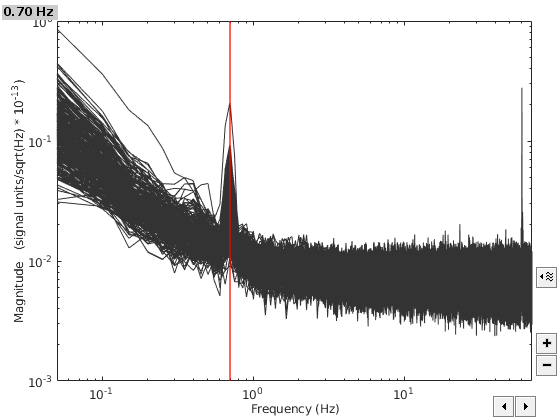 SSP analysis of empty room recording in Brainstorm, showing the topography of two components that seem to fully capture the artefact. The component time courses further show the constancy of the artefact and a pattern of beats lasting roughly 50 seconds, so a narrow frequency peak indeed. 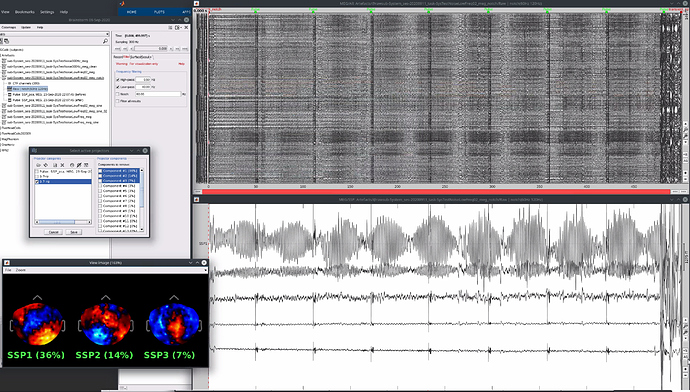 This is an expected environmental signal which is not fully attenuated by the shielding. Here is the topography of a sinusoid fit at 60 Hz to the raw empty room data, for comparison with other artefacts. None of the above match this topography exactly. 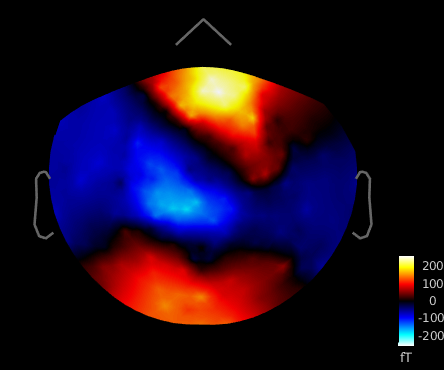 Stronger 0.7 Hz & harmonics up to 10 Hz
Unfortunately, this previously reported artefact is now much worse. The amplitude is much larger, causing harmonics to also rise above the noise floor. This also interacts with the power line noise producing side peaks around 60 Hz. This is what a standard noise recording now looks like: 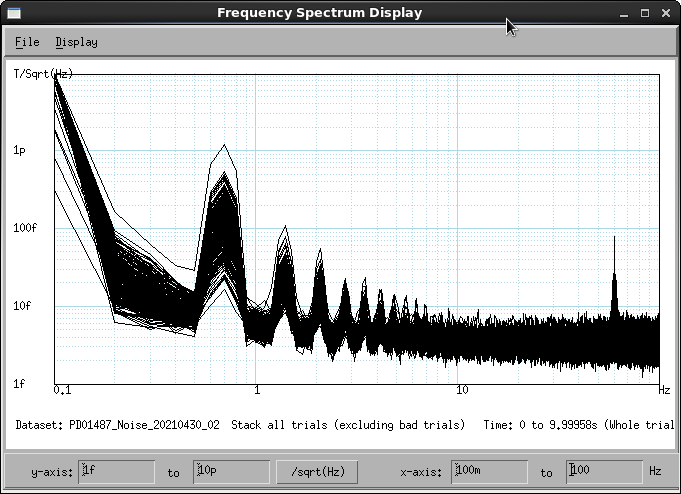 I’m hoping that this can be cleaned with SSP as we did previously for a sensor issue. I will confirm later, but it would surely require at least 2 components since the phase of the signal varies across sensors, thus it is not a fixed topography. I will update this post once I figure this out. Note that this phase variation also causes the shape to deviate from a sine wave with the application of 3rd gradient noise suppression (aka CTF compensation in Brainstorm), while the raw signals are very sine-like.

Finally, please pay attention to the noise spectrum as this artefact can make it more difficult to see other issues. Recently, MRT27, which is disabled, regularly needs to be defluxed when it causes jumps in neighboring channels. This is what the spectrum looks like in such an example: 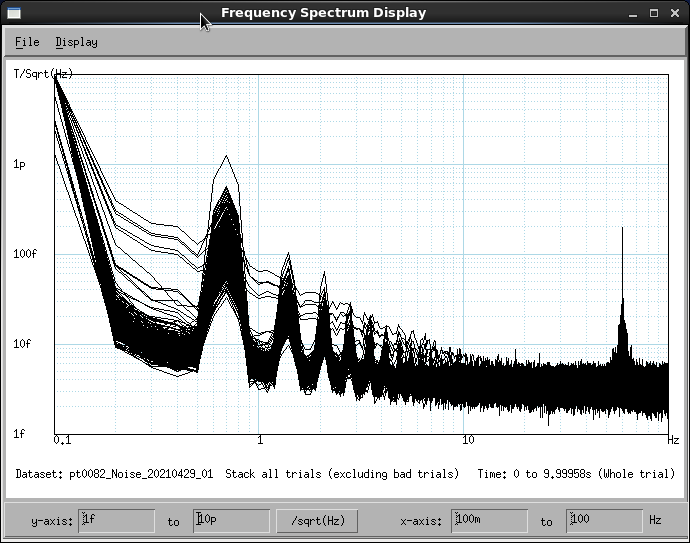