CIVET output may be used as input to Surfstat in order to conduct cortical thickness analyses. Here, we will walk you through a few simple examples of a between-subjects design, a within-subjects / repeated measures design, and a mixed design.

The purpose of this SurfStat documentation is to be a “quick start” guide, containing just the basic steps they are most likely to need to know. For more exhaustive documentation, we suggest you refer to:

CIVET_2.0_mask_left.txt and CIVET_2.0_mask_right.txt (hires, but can be downsampled to lores by taking data for only the first 40,962 vertices of each hemisphere)

CIVET_2.0_mask_hires.txt and CIVET_2.0_mask.txt are the masks for the combined hemispheres, corresponding to hires and lores surfaces. Note

CIVET_2.0_lobes_left.txt and CIVET_2.0_lobes_right.txt (hires, but can be downsampled to lores by taking data for only the first 40,962 vertices of each hemisphere)

CIVET_2.0_lobes_hires.txt and CIVET_2.0_lobes.txt are the lobes atlases for the combined hemispheres, corresponding to hires and lores surfaces. Note that the hires combined atlas will not work with the lores combined surface.

CIVET_2.0_AAL_left.txt and CIVET_2.0_AAL_right.txt (hires, but can be downsampled to lores by taking data for only the first 40,962

vertices of each hemisphere)

CIVET_2.0_AAL_hires.txt and CIVET_2.0_AAL.txt are the AAL atlases for the combined hemispheres, corresponding to hires and lores surfaces. Note that the hires combined atlas will not work with the lores combined surface.

CIVET_2.0_DKT_left.txt and CIVET_2.0_DKT_right.txt (hires, but can be downsampled to lores by taking data for only the first 40,962 vertices of each hemisphere)

CIVET_2.0_mask_hires.txt and CIVET_2.0_mask.txt are the DKT atlases for the combined hemispheres, corresponding to hires and lores surfaces. Note that the hires combined atlas will not work with the lores combined surface.

This tutorial assumes that you have already downloaded your data from CBRAIN. If you have not, please see the SFTP section to learn how to download your data.

Make sure that your average surface(s), downloaded from CIVET_2.0.tar.gz, are in your surfstat folder:

Make sure that the data you have downloaded from CBRAIN is in your surfstat folder:

The glimfile is a spreadsheet file (ending in .csv, space delimiters) that contains all of your study information to be read into Surfstat. Each row is a subject.

If you have not run QC, you can either go back and run it, or you can manually construct or script a glimfile yourself (space-delimited).

In this example, we use:

Where Time1 and Time2 are organized as 2 different CIVET studies with an identical set of subjects, one from Time1 and the other from Time2 . Your data may be organized differently, but you will need to be consistent with its particular directory structures in the following steps.

If you are able and interested in scripting the following process of setting up the glimfile, you may do so. We have provided sample MATLAB code to create a glimfile: MakeGlimFile_generic.m. Or, if you are not comfortable with programming, you may try the following. These files are comma-delimited, and can be opened for easy viewing in Excel, OpenOffice, etc. First, we look at ~/surfstat/TETRIS/Time1/QC/civet_tetris.csv :

Please note that even though you are opening it as comma-delimited, once you edit it you will need to save it as SPACE-delimited in order for the formatting to be compatible with SurfStat.

(A) There are many columns of data, and most of these you will not need. In this example, we only care about ID, ThicknessLeft and ThicknessRight (these are currently missing headers - to be fixed) , so we delete all the other columns:

This example is a mixed design, because it contains a within-subjects / repeated measures variable (TestTime: Time1 vs. Time2) as well as between-subjects variables (Group: Experiment vs. Control; Age: continuous variable).

(B) Next, we are going to insert columns for our variables: TestTime, Group, Age:

For ThicknessLeft and ThicknessRight, we also need to be careful about designating exactly where our files are located. The .csv file output by CIVET QC contains a relative path, and not an absolute path. Note: Depending on your data organization and if you run your surfstat code directly from the surfstat directory, you may not need steps (C)-(F), i.e. if you are careful to load in your glimfile data from ~/surfstat/<Study> and if the first subject folder ( <ID> ) named in ThicknessLeft and ThicknessRight is located directly in ~/surfstat/<Study>/<ID> . In this example, the files listed are contained within the folder ~/surfstat/TETRIS/Time1/ . To be safe, we create an absolute path by prepending ThicknessLeft and ThicknessRight with this for every row. This can be done manually, by scripting, or by the following little trick in OpenOffice:

(C) First, insert 2 temporary new columns, 1 before ThicknessLeft, and 1 after ThicknessLeft. In the first entry of the 1st new column, enter ~/surfstat/TETRIS/Time1/ , and copy/paste it for every row:

(D) Then, in the first entry of the 2nd new column (Column G here), enter =CONCATENATE(E2,F2) (where E2 and F2 are the immediately 2 preceding columns in the same row), and copy/paste it for every row:

(E) Now, we want to delete those 2 preceding columns. But if we were to do that right away, it would corrupt our concatenated column, which depends upon them. So we (1) copy all the values of the concatenated column, (2) select all the values from the ThicknessLeft column, (3) Right-click and select “Paste Special”, and (4) for “Paste Special” options, Select only Text. We have replaced our incomplete directories of ThicknessLeft with the full directory structure. Now we can delete those 2 extra rows that we had temporarily put in:

(F) Repeat for ThicknessRight, or simply copy/paste from ThicknessLeft and then find/replace all instances in that column of “left” with “right”:

(G) We can now either repeat the above steps for ~/surfstat/TETRIS/Time2/QC/civet_tetris.csv , and then append it to the current file, OR simply (1) copy/paste everything into another simple. csv file, (2) find/replace all instances of “Time1″ with “Time2″, and (3) append it the current file:

(H) We are going to save this file 2 ways. Save it with the headers, as:

(I) Then delete just the first row (the headers only), and save again (space-delimited, not comma-delimited!) as

The version with the headers is for your future reference, but the one without headers is the one that SurfStat can read.

Tip: if you ever have problems with opening a glimfile in SurfStat, try opening it in a simple text viewer (TextEdit, WordPad, vi, etc.) and confirm that it is indeed space-delimited. If you run into problems with commas, you can also simply use the following Unix command to replace all commands in your glimfile with spaces:

We chose this example as a relatively complex design (mixed-design, containing both between- and within-subject variables) in order to show you the most complex scenario. However here are contrasting examples of glimfile construction if this were only a between-subjects design:

vs. if this were only a within-subjects design (whenever there is a repeated-measure, there will be TWO ROWS per subject ID):

Sample MATLAB code can be found here in its entirety: Sample MATLAB code. You should copy/paste and save it as a .m file. Hints for common parts that you are likely to need to edit are below: 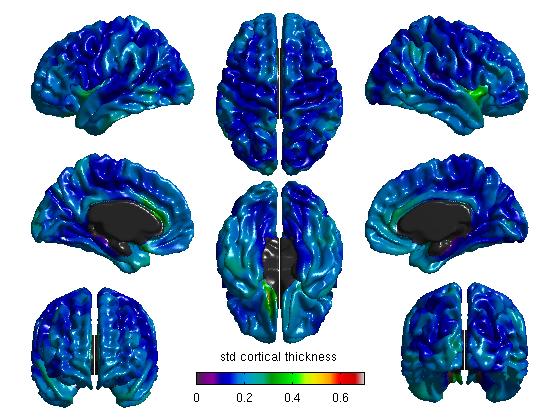 Hint: as a sanity check, you may also do this without the midline mask (remove “.*mask” from the commands above). You should see the data clearly outlining the midline. If it looks off-center, it is possible that (A) you mixed up CIVET 1.11 or CIVET 1.12 data with the CIVET 2.0 average surface, or vice versa, or (B) if you scripted it yourself, that you used non-resampled (native) data on the average surface. 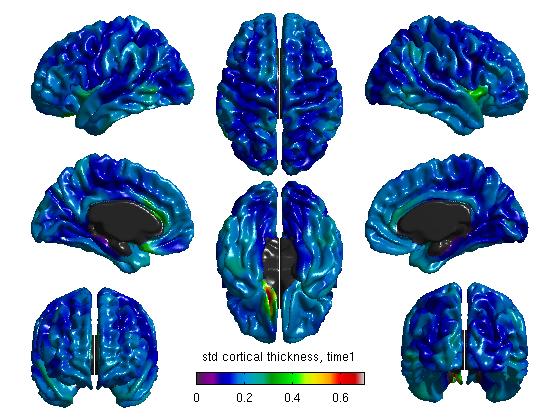 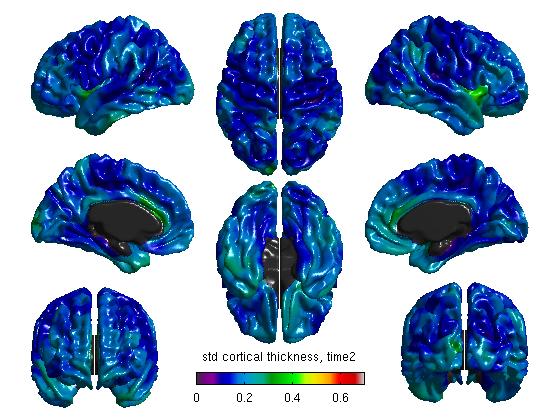 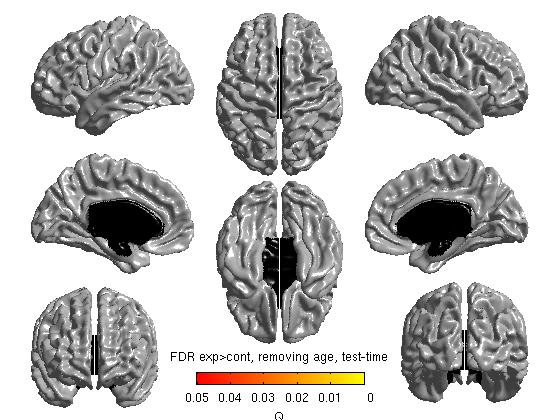 Our own FDR and RFT maps in this example are blank (showing no areas of statistical significance), perhaps due to small n size with this sample experiment. As a quick aside, here are 2 examples of significant FDR and RFT maps from other studies: RFT.jpg and FDR.jpg 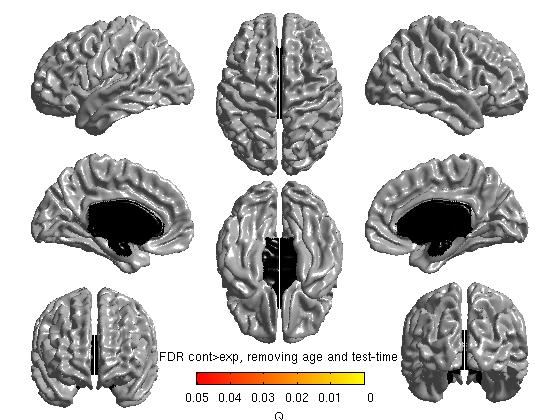 Note: the default threshold for RFT is 0.001 and for FDR is 0.05. The RFT one is extremely strict, and Boris Bernhardt and Keith Worsley have suggested that it may be loosened to 0.01, maybe up to to 0.025. To change the RFT threshold:

For an example of how to analyze age, see the Age example on Keith Worsley’s page.

There are a variety of simple plotting examples using SurfStatPlot on Keith Worsley’s page.

However, you may also use MATLAB’s functionality. If you wish to collapse values across vertices, it is critical to first exclude the vertices that fall under the midline mask:

Imagine that you wish to show the mean and standard error thickness across subjects:

The code above produces: 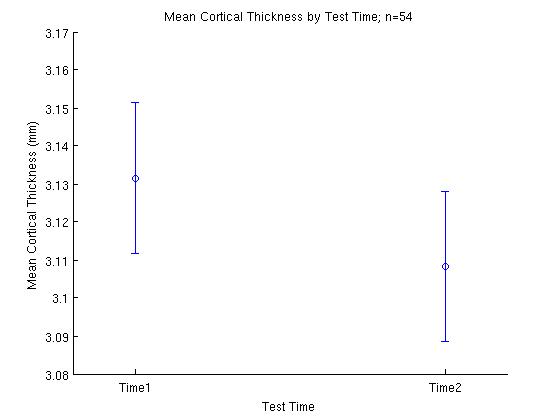 A few more examples of figures produced by MATLAB: 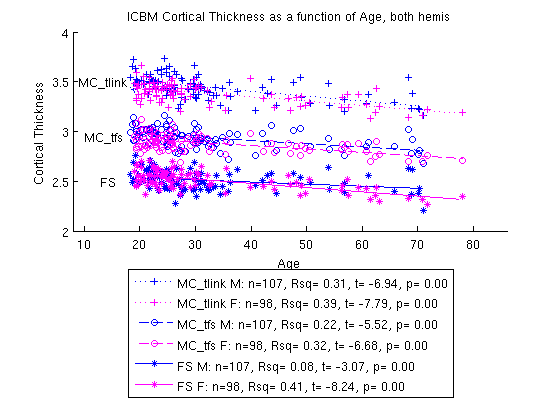