Once all subjects have processed to completion, it is necessary to perform quality control (QC).

If you used CBRAIN to process your data, you should have already run the QC pipeline by selecting the options for “Launch Claude’s QC script” (as described in Basic Usage of CIVET, CBRAIN Interface - Inputs ). If so, you already have a QC study folder (in our example, “example_QC”) and can proceed to the next section below. 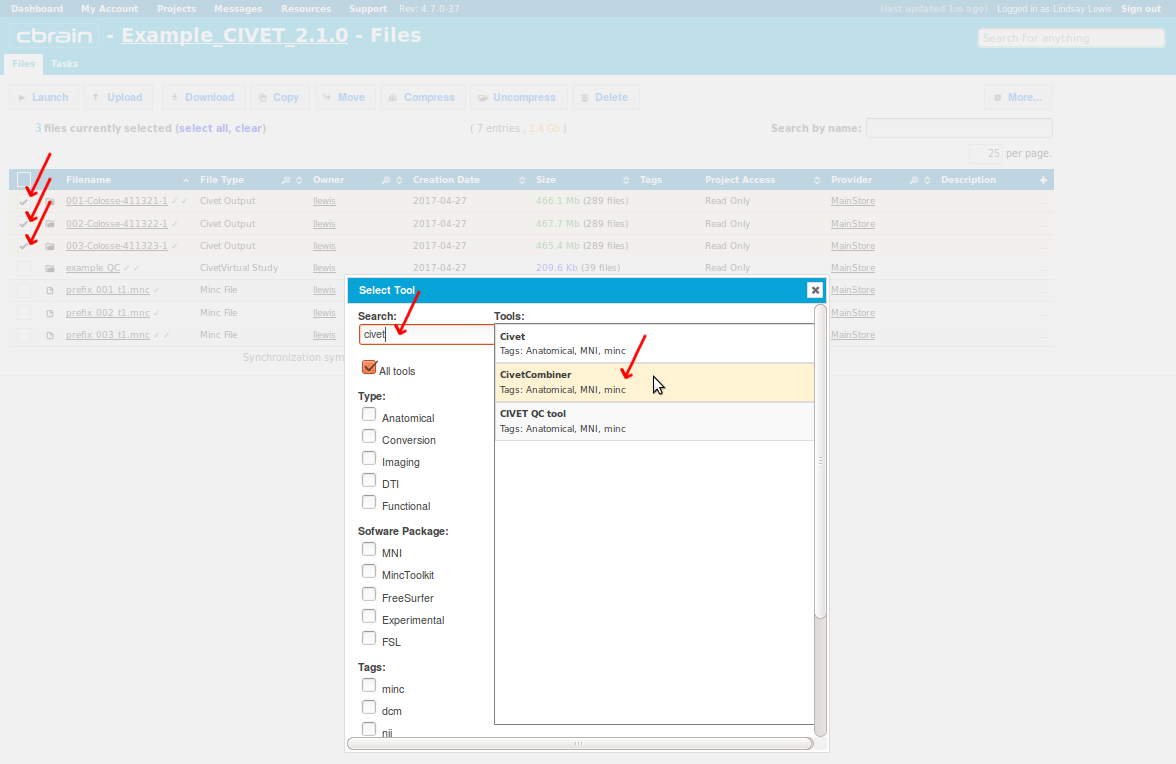 As described in Basic Usage of CIVET, CBRAIN Interface - Outputs , you have a choice of viewing your QC folder output either (1) directly on the CBRAIN interface, or (2) you may download it.

To view it on CBRAIN, navigate to the “Files” tab, and click on the name of your QC study to view all subjects’ QC figures and tables (here, “example_QC”). 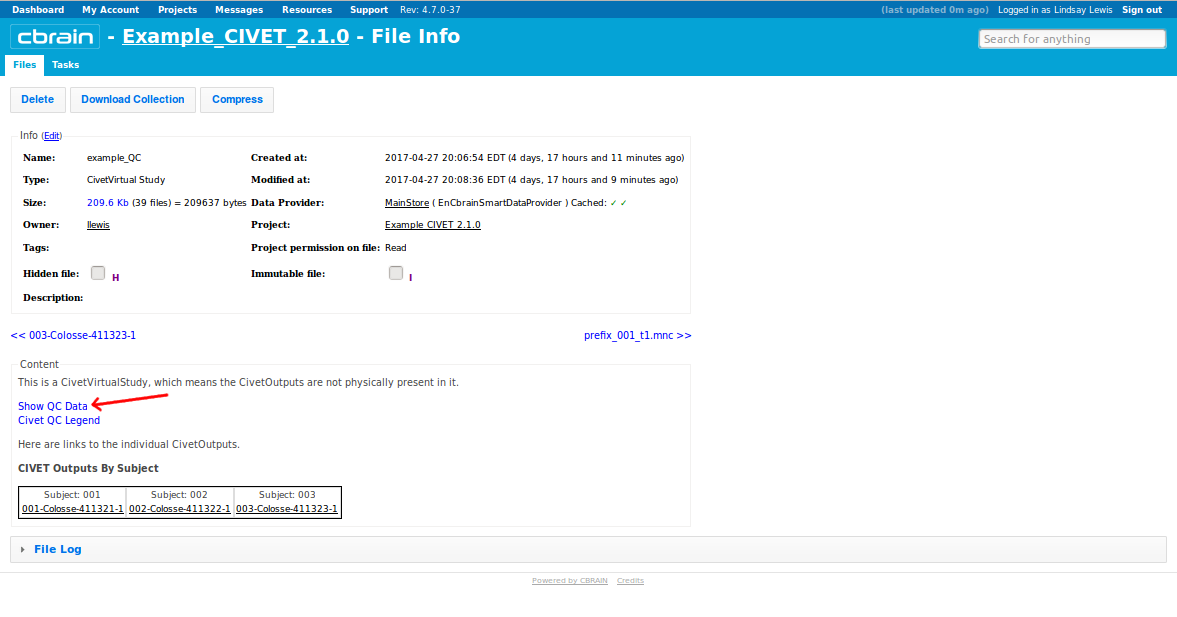 If you download it, important files to look for are:

Whether on CBRAIN or from your downloaded files, the HTML table should look roughly like the one below. Various colour codes indicate possible errors; see the legend. The results of red boxed subjects should be examined carefully. 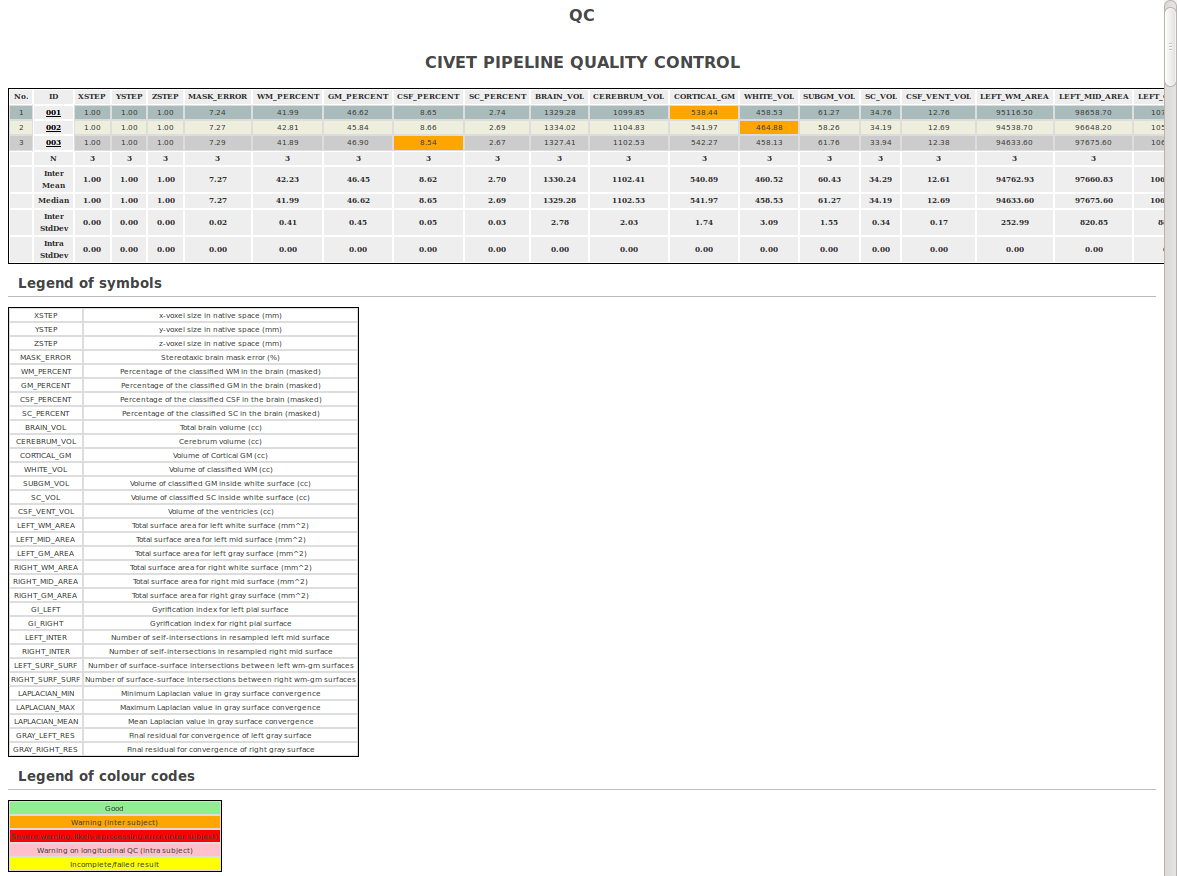 Various metrics are tabulated for the subjects:

At the bottom of this table, the population mean and standard deviation is given for most of these fields. Outliers can be identified by values more than one standard deviation away from the mean, as seen in the plots following the table.

By clicking on the subject id in the table, you can view its verify .png images (same as clicking on “Show Displayable Contents” for each subject on CBRAIN). 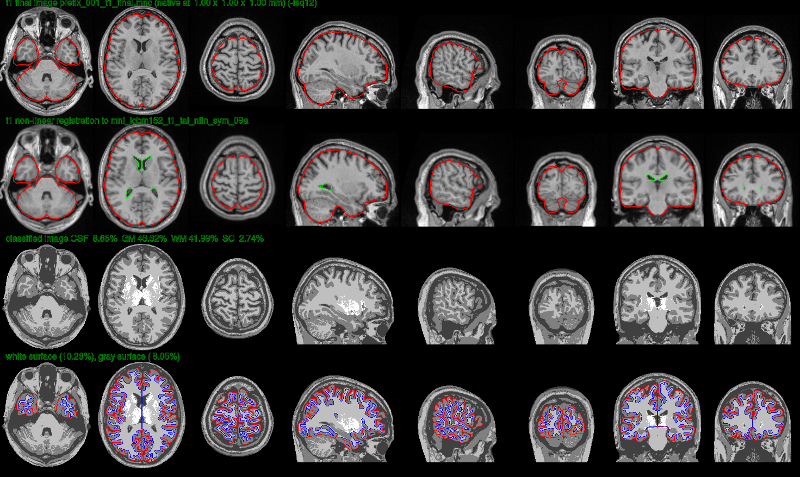 In the clasp image below, one looks at the quality of the surface extraction. (Note: due to maximum size restriction in this web documentation, the resolution of this figure has been reduced.) This figure is helpful to detect masking errors (pieces of skull attached to white surface), motion artifacts (white surface looks jaggy with many bridges across gyri), under-expansion of the gray surface (often in frontal and temporal lobes), as well as poor N3 correction of non-uniformities (atypical pattern of cortical thickness). 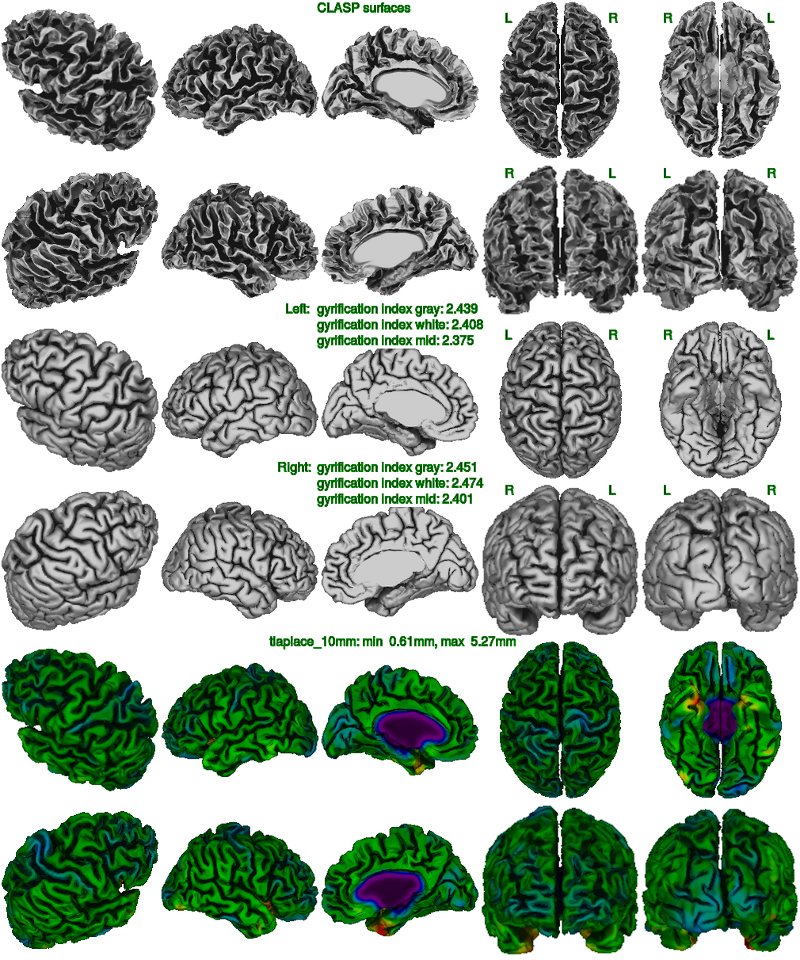 In the basic lobar atlas image below, one looks at the quality of the surface registration. In particular, the border of the frontal and parietal lobes at the central sulcus must be perfectly identified. The AAL and DKT-40 atlas is also available as an option in CIVET; for detailed information on atlases, see VisualGuides. Below the atlas, the painted lines should generally follow the gyri (as opposed to sulci). 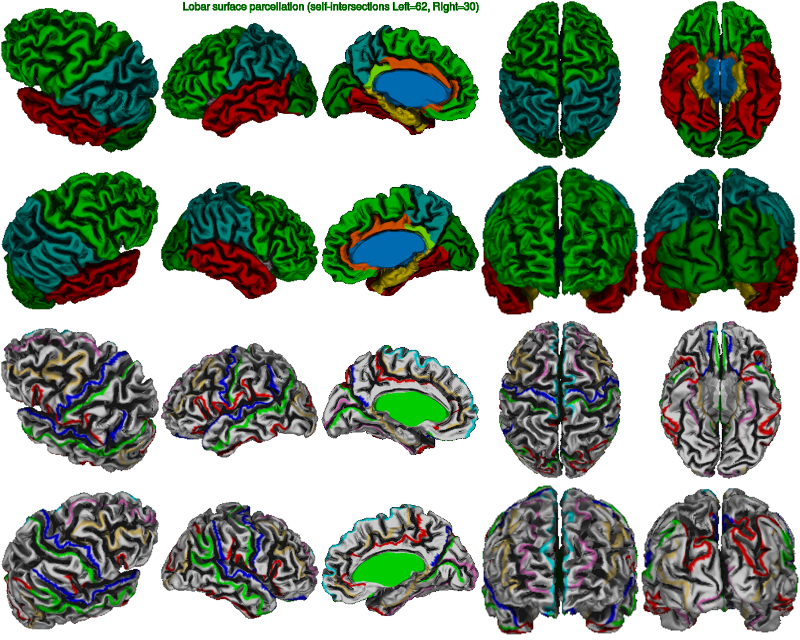 In the surfsurf image below, one looks at the number of gray-white surface-surface intersections (tiny spots in pink). These usually occur when the gray surface is arbitrarily close to the white surface as a result of abnormally thin cortex (usually indicative of poor N3 correction of non-uniformities), of masking errors, of tissue classification errors (often, broken thin strips of white matter in the temporal lobes), and of defects in white surface extraction (erroneous bridge across a sulcus cutting through cortex).

In the laplace figure below, one looks at the convergence of the expansion of the gray surface. A totally green image (Laplacian value of 10) indicates perfect convergence. Colours in high spectrum (red to white) indicate vertices outside the pial surface (over-expansion) while colours in the low spectrum (blue to black) indicate vertices inside the cortex (under-expansion). Using the laplace figure in conjunction with the converg figure below, one can confirm if convergence is incomplete (see example Gray surface (under-)expansion failure)

In the angles figure below, one looks at the mesh distortion that occurred during the expansion of the white surface to the gray surface. Ideally, the vertices on the white surface mesh should expand perpendicularly to the gray surface. However, other constraints such as mesh smoothness and mesh self-intersection may cause distortion of the mesh. Large mesh distortion will cause an overestimation of the cortical thickness using the tlink metric. As a quality control tool, very large mesh distortion can also occur in regions where the brain mask is wrong, like extruding into the skull. There is generally greater mesh distortion deep into sulci where many vertices collapse, causing numerical difficulties when evaluating the normal directions. 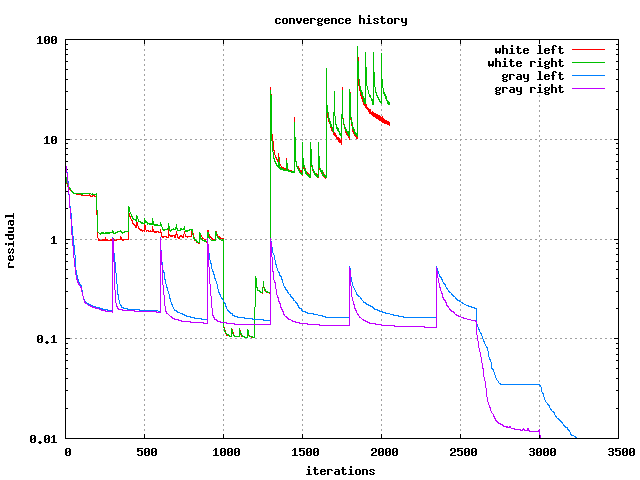 Brainbrowser allows for visualization of volumes and surfaces through a standard web browser, without the need for specialty software installation.

Once you have downloaded your data from CBRAIN, you may also upload individual volumes or surfaces directly into Brainbrowser.

In the event that you suspect motion artifacts, you may wish to use Brainbrowser’s Volume Viewer in order to scroll through your volume ( *.mnc file) to search for potential “ringing.”

Or, you may wish to use the Model Viewer in order to view your surface ( *.obj file) from additional angles.

If you have BIC tools installed, you can also use Display to view your t1 *.mnc with or without its *.obj surfaces overlaid. More information on Display can be found on slides 92–100 here: http://www.bic.mni.mcgill.ca/uploads/Seminars/2014-03-17_-OMM_Introduction_to_CIVET_2-0-_Lindsay_Lewis.pdf or MNI Display - Software for Visualization and Segmentation of Surfaces and Volumes